the politics of justice 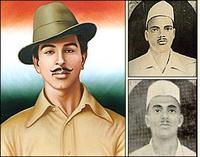 I've always been fascinated by Bhagat Singh. Just 23 when he died. A true revolutionary if there ever was one. So when i got a chance i picked upo this book The Trial of Bhagat Singh by AG Noorani. A sham of a trial if i may say so. An advocate of the Supreme court of India and a versatile journalist, Noorani makes plain the facts of this case and how the courts of time were used as political weapons by the colonial rulers. He also castigates the leadership of the Congress led Independence movement for their indifference towards Bhagat Singh.

The Lahore Conspiracy case as it was called ended with the execution of Bhagat Singh, Sukhdev and Rajguru. Young revolutionaries all. And while this was happening, what was Gandhi up to? Actually nothing. Which is the point. For some time now, Bhagat's popularity was rivalling that of gandhi, which i'm sure did not sit well with the 'great soul'. Gandhi's role is discussed at length and it is concluded that had he wanted Gandhi could have gotten Lord Irwin to commute Singh's sentence. If you've seen the movie about Bhagat Singh (i highly recommend the Ajay Devgan one) then you'll see a gandhi who could've made Bhagat's pardon a condition to the signging of the Gandhi-Irwin Pact, but did not. This book shows that incident and its goings on in all its glory. And Nehru? The less said the better. Always vacillating, never really emerged from under the thumb of gandhi. But one man stood above them all, and defended Bhagat Singh. That man was Mohammed Ali Jinnah. He made a truly impressive speech that played a pivotal role in defeating the Hunger Strike Bill.

The book also chronicles the famous hunger srtike that Bhagat Singh and his comrades undertook to improve the lot of the political prisoners of that time. The hunger strike really struck at the very heart of the British. They tried everything from forceful feeding to replacing all the water in the cells with milk. The story that Jatindranath Das swallowed a whole lot of chili powder to infame his throat so that the British could not force feed him is not a legend. It is fact. This however became fatal. But he'd made his point.

This book really opens up sides of Bhagat Singh we never really knew about. Go ahead and pick it up, but for starters go here It's a pretty comprehensive site about Bhagat Singh and even includes the full text of Jinnah in the Central Legislative Assembly. INQUILAB ZINDABAD!
Miaowed by Shenoy

flooded with comments already..!!?? blame ur HTML configuration for that..I think ur pretty organised for a rambler!!..Just a thought..