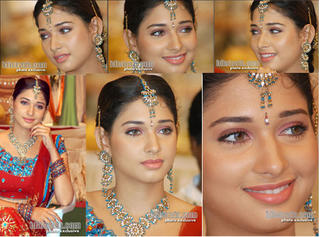 She’s a beauty ain’t she? But who is she? This was the subject of my investigation brought on by factors beyond my control. This is how it all happened…
The first contact….
As usually happens with men of my age, one of the many things that my friend and me touched upon (figuratively of course) was women. “Hey Shenoy”, he said, “Our Chief Minister’s son is damn lucky man!” Curious, I asked why? “Hey I got these neat pictures of Dharam Singh’s daughter-in-law. She’s beautiful. Gorgeous!” I asked him to forward the mail tome which I promptly checked on Saturday. Whew! She was beautiful. And I had to agree – Dharam Singh’s son was really lucky.
Sita aur Gita?
Bright and sunny black Monday. I walk into office, do my usual stuff and sometime in the afternoon, I get a forward from another friend of mine with the subject “Watch out!” Mails are meant to be opened and the inevitable happened. And it was the same beautiful woman! But this time the mail said that it was (believe it or not!) Tarannum Khan, the notorious Mumbai bar-girl who has been in the news for all the wrong reasons – bookies, fixing and the like. And it grandly declared under the last photograph “Now do you understand why so much [sic] cricketers and film-stars have gone mad behind her?” This got me really confused…and curious? One woman, two identities? Hmmm…
Time to probe deeper into the Lady
Apparently I was not the only one who got the mail saying that this lady was Tarannum Khan. A few guys at my usual adda on MG Road rationalised Aditya Panscholi’s and Muralitharan’s involvement by saying that with a bar-girl that looks like that who wouldn’t? That was when I decided that I would get to the eart of this matter and settle it once and for all. There were too many reasons for this:
a) If she our Chief Minister’s daughter in law, then I should clear her name
b) She couldn’t be a bar girl (don’t ask me how I know:)
c) If it was neither of the above, I couldn’t just sit back and let her name be mud
d) Was idlebrain.com the new desibaba?
e) I like cheap thrills
Nimmajji yaaro idu?
Over some stolen time, I did the first logical thing. I visited idlebrain.com, the site that was so prominently mentioned on the pictures. It turned out to be a site devoted to Telugu cinema. I could find nothing that would reveal the answer. Although I did learn a lot about Telugu film mahurats, Allu Arjun’s inauguration of K-Lounge, the marriage of Jayanthi and other such earth-shattering and interesting things. They do have an interesting photo gallery though. Next I tried Google. Having used up all my permutations/combinations (dharam+singh+daughter+in+law, ajay+singh+wife, chief+minister+wedding, tarannum+khan ….bar+girl, etc). I was no closer to the truth, although the last search threw up a lot of interesting pictures, if you know what I mean.
Finally Shenoy thinks straight
Damn! How could I not have thought about it? I went to the resident Telugu movie expert in my office, showed him the pictures and…even he could not tell me who she was. Damn! How could I not have thought about it? I went back to idlebrain and a little searching later, I got hold of an e-mail id. So I promptly mailed Jeevi of idlebain, attaching the photographs of the lady in question. By the way, if you want new and nice pictures of heroines and heroes, he’s The Man to get in touch with.
The lady stands revealed
Jeevi, having received my mail very promptly replied back and the answer lay revealed. She was Tamanna, an actress in Telugu movies who is also acting in Manoj’s new movie. Jeevi also sent me this link, and this one too. So for those who want to see the photographs in their original context (and where they should have remained) just follow the links. So there goes! Not Dharam Singh’s daughter-in-law (according to a friend of mine who claims to have seen her photograph, she is not even half as beautiful as this), not The bar-girl, but just another actress. But a gorgeous one nonetheless. And smoulderingly hot..and…forget it! So there it is people. The end of this chronicle.
But if you were one of the people who got the mail(s) I got, or one of those who sent it out, do me a favour, mail this post to whoever sent it to you/ whoever you sent it to.
Hopefully the next time, someone sends us pictures of a bar girl, it will be.
Miaowed by Shenoy