The global financial crisis in an analogy we can understand

In which The Bekku unashamedly cuts-and-pastes something found on the net, but not without trying to find out its provenance or the original author so it can be attributed but nopes, and in no mood to be dogged. But still, You, yes You! – who thought it and wrote it first – The Bekku thanks you. Now on with the analogy….

Linda is the proprietor of a bar in Cork. In order to increase sales, she decides to allow her loyal customers - most of whom are unemployed alcoholics - to drink now but pay later. She keeps track of the drinks consumed on a ledger (thereby granting the customers loans).

Word gets around and as a result increasing numbers of customers flood into Linda's bar. Taking advantage of her customers' freedom from immediate payment constraints, Linda increases her prices for wine and beer, the most-consumed beverages. Her sales volume increases massively. A young and dynamic customer service consultant at the local bank recognizes these customer debts as valuable future assets and increases Linda's borrowing limit. He sees no reason for undue concern since he has the debts of the alcoholics as collateral.

At the bank's corporate headquarters, expert bankers transform these customer assets into DRINKBONDS, ALKBONDS and PUKEBONDS. These securities are then traded on markets worldwide. No one really understands what these abbreviations mean and how the securities are guaranteed. Nevertheless, as their prices continuously climb, the securities become top-selling items. One day, although the prices are still climbing, a risk manager (subsequently of course fired due to his negativity) of the bank decides that slowly the time has come to demand payment of the debts incurred by the drinkers at Linda's bar. However they cannot pay back the debts.

Linda can not fulfill her loan obligations and claims bankruptcy. DRINKBOND and ALKBOND drop in price by 95 %. PUKEBOND performs better, stabilizing in price after dropping by 80 %. The suppliers of Linda's bar, having granted her generous payment due dates and having invested in the securities are faced with a new situation. Her wine supplier claims bankruptcy, her beer supplier is taken over by a competitor. The bank is saved by the Government following dramatic round-the-clock consultations by leaders from the governing political parties (and vested interests). The funds required for this purpose are obtained by a tax levied on the non-drinkers.

The Bekku concedes that it does not pay to be a teetotaler. Drink up!
Miaowed by Shenoy No comments: 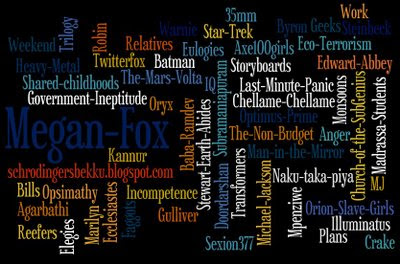 Wordle. Do with it what you will. Click below maadi to see this one and to create your own Wordle....

Email ThisBlogThis!Share to TwitterShare to FacebookShare to Pinterest
Labels: day in the life, musings

Christian Bale is amongst the last of humankind fighting against a stronger enemy who is hell bent on wiping all vestiges of humanity from the face of the planet. Having always lived and grown up under the shadow of this enemy, he knows a thing or two about the adversary that the other people in the resistance don’t. Christian Bale then meets another man of his own kind who he is suspicious at first and later comes to trust. Many action sequences and CGIs later, this person ends up helping Christian Bale win a decisive battle.

Well by now you would’ve guessed which movie I am talking about. The enjoyable dragon flick Reign of Fire. Imagine how much more fun the movie would’ve been if he had a meltdown or go ranting at the DP during the shooting of RoF.
Miaowed by Shenoy No comments: