Somewhere in my family photo album is a photograph from the time when we were in Bidar. A faded picture of me at about 4-5 years sitting on my uncle’s lap on a reddish sofa and he’s reading out to me or rather taking me through a book. It was obviously a special occasion when my uncle came visiting, hence the photo I presume, and he was coming from large magical city called Bangalore. And my uncle always came bearing gifts. And this time was no different. It was my first ever comic book. A collected volume of 10 Amar Chitra Kathas which is what he is taking me thorough in that photo. It also happened to be the first ever English book I ever laid my eyes upon. The inexplicability of the strange words and strange language meant that I understood not a thing, but this was very well compensated for by the loads of pictures and characters that the volume contained, each panel a doorway to a new adventure.
Jumping and bouncing on a sofa is a lot more fun when you are in the middle of the battle of Kurukshetra riding a chariot. Pillow fights with your sister are more enjoyable when you are fighting Duryodhana with a mace. Broomsticks find their real calling when they are arrows. The neighbour’s pesky Pomeranian is a lot more tolerable and infinitely more fun to have around when you are Babruvahana trying to chase and capture the pesky horse from Yudhishtira’s Ashwamedha that has strayed into your territory. And of the whole volume of ACK, none was more enjoyed or leafed through or lived and relived than the Ghatotkacha comic. In fact that’s what I would say was the first English book I ever read, consumed, inhaled. And my first comic. The cover showed a colour illustration of Ghatotkacha taking to the skies with Shashirekha in his hands, her cot included. A thoroughly enjoyable story with lots of magic, asuras, shape-shifting legions and flying clothes. I remember shedding a tear or two when Ghatotkacha dies. 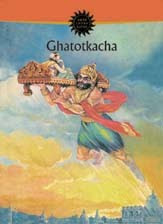 Flashforward a couple of years. We have shifted to Gulbarga. I am in my second standard. All grown up. Grown up enough to make my own bows and arrows from branches, twigs and twine. Old enough to walk on my own all the way to school, and take my sister along with me too. But she is still Duryodhana and I am whoever catches my fancy. My class has enough dushasanas and ravanas for me to fight with. There’s also new games like kirket and football to play now, and trees to climb and fall out off. And there’s now a new box at home called TeeVee for dinner-time entertainment. Thus the hindi lessons begin by professor Doordarshan. One fine sunday, my father tells us we’re going to a film, Maya Bazaar. What’s it about? I ask. Not that it mattered. Well, it’s about Abhimanyu, and Krishna and Ghatotkacha my father says. Ghatotkacha??? Let’s go! And so we do. Film starts. It’s black and white!!! Not a new film. And it’s in some strange language that I cannot follow. Turned out it was the Telugu original. But none of that mattered once the film hit its stride and Ghatotkacha made his appearance. There was magic! And fights! And Ghatotkacha becoming big and then small. Yay! Opening his mouth and all the food jumps right into his mouth. And the song, ‘Hoho hoho ho ho…..’ brought much glee (vid below). Having been brought up on stories from the puranas and mythology, and the staple reading being Amar Chitra Kathas, this was like the best! I remember sitting transfixed and clapping my hands in glee. So what if it was Telugu? I knew the story inside out, and my father kept interjecting now and then with some additional info. Ah. The joy. Ghatotkacha spiriting away Shashirekha. Then changing to her form and taking everyone for a ride. Lovely. 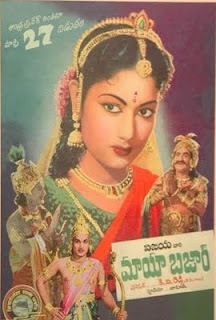 The story is simple. The Pandavas are in exile. One of Arjuna’s wives Subhadra and her son Abhimanyu are staying at Dwaraka with her brothers Krishna and Balarama. Now Abhimanyu and Shashirekha, Balarama’s daughter are in love with each other having been betrothed in their childhood. But times have changed. The Pandavas are paupers and Revathi, Balarama’s wife is no longer kicked about marrying her daughter off a pauper’s son and instead pitches for Lakshmana, Duryodhana’s son and the prince of Hastinapura, exactly what Shakuni wants. As any husband with a naggy, greedy wife Balarama agrees and anyways Duryodhana was always his favourite disciple. Realising what’s afoot, the trickster Krishna makes sure the miffed Subhadra and Abhimanyu are taken through a particular route. Enter Ghatotkacha! All angry and miffed at seeing two intruders in his territory. A battle ensues – flying arrows and all – between Abhimanyu and Ghatotkacha till Subhadra intervenes after Abhimanyu is defeated and the men realize that they are cousins, brothers. Ghatotkacha being Ghatotkacha agrees to help and with his retinue proceeds with due alacrity to Dwaraka to sabotage Shashirekha’s marriage to Lakshmana Kumara. Much fun and joy ensues, including a hilarious scene where Shakuni gets a taste of his own medicine in dice and Lakshmana Kumara quite simple some bitter medicine. Lots of mirth and joy ensues for the viewer. And of course all ends well with the lovers united.

The thrill of watching Maya Bazaar continued for a while. For the next few days, I was Ghatotkacha. And try as I might, the anna sambar never jumped off the plate into my mouth like at the end of this awesome song here:


Flashfoward to Karwar a few years later. I’m pretty good at cricket, and marbles. Older now, in the 5th standard. Have beaten up enough boys for a concerned parent or two to drop by home to complain to my father about my violent ways. In my defense, they deserved it for having mocked at me because of my shaved head. Teachers’ pet at school. Holy enough to play Joseph in the school’s Christmas play. Weak enough to faint while trying my first header while playing football. And role playing game is now playing Fauji with guns. One fine sunday, my father tells us we’re going to a film, Maya Bazaar. Yay! I jump to go and get ready. Another pleasant surprise awaits at the theatre. It is in Kannada. The dubbed version. Now I can hear Ghatotkacha go ‘Hoho hoho ho ho…..’ in kannada! For the next days, I was ghatotkacha again, and the fauji guns became maces and some got turned into bows when I chose to be arjuna. And as hard as i tried, the darned food would still not float into my mouth!

Flashforward many many years. Maya Bazaar still remains a favourite watch. I’m all grown up. Approaching my 30s. Old enough buy my own VCD of Maya Bazaar, the Kannada version. Even managed to catch the play Maya Bazaar by Sri Venkateshwara Natya Mandali (Surabhi) from Hyderabad. Fabulous as it was, as much as I enjoyed the play and Ghatotkacha’s role was played amazingly well, I still missed SVR’s portrayal.

And here I sit here today, all set to go watch the original Maya Bazaar in the theatres again, this evening! In colour!! Even the new trailer is giving me goosebumps:


Looking forward with as much joy if not more. Is it the movie? Or is it a way of reliving me as I was, and used to be? Or as I wish I could be? All that I know is that I have given up even trying to get the food to float and jump into my mouth. I’m not Ghatotkacha.
Miaowed by Shenoy No comments:

Literally that would mean ‘don’t show torchu to the sun-nu’. It’s a series of aphorisms (?) in Kannada slang whose closest English equivalent – in terms of import – would be ‘Don’t teach your grandfather how to f**k’ or more politely, ‘don’t try to teach the teacher’ or in certain cases/context ‘don’t bring coals to newcastle’. Very handy when used well. Disregarding the force-fit ones (Artistgey sketcha?, Autogey stand-a? etc.) here are my favourites, in no particular order:
1. Suryange torcha?
2. Conductorgey ticketa?
3. Ravi Chandrangey remake-a?
4. Hajaamangey haircut?
5. Gomateshwarangey show na? ….and *drum roll*….
6. Deve Gowdagey sleeping tableta?
Take your pick. Use liberally. Prefixing ‘nimmajji loafer…!’ to any of the above, optional.
If you have more, feel free to add on the list, leave a comment. Variety is spicier and all that.
Miaowed by Shenoy 3 comments:

The long and winding road…. Sunset on the road. Somewhere between Hubli and Yellapur. It was a nice evening on the extended road trip, and somehow, some quirk, and the film exposed maybe a tad too early and the processing just gave this a nice natural green/orange tinge. Ah. The joy of film. Circa: February 2005. Camera: Analog Canon EOS 300.
Miaowed by Shenoy No comments: