A nation needs its heroes. It needs its legends. When it comes to our paladins and men of myth, they need to be larger than life. From them it is that we draw our inspiration. Humanise them if you will, but reduce them not to cut-and-dry personalities. Too much rationalisation will leave these legends shorn of their legendary-ness (if I may use that word) and leave behind a totally factual kernel, which in itself is sometimes enough to build a legend on. Back to square one.

This land we live in is not short of heroes and legends. But I detect a trend whereby each and every one of them is successively put under the scanner, and the legend left demolished. That’s the new intellectuals for you. Who systematically are eroding away at our sense of collective self. I’m scared a day will come when my grandchildren will grow up thinking this country of theirs only breeds cowards, sissies, eunuchs and opium addicts. 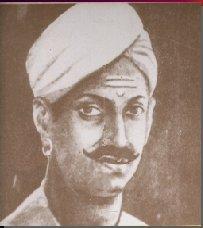 Case in point Mangal Pandey. I’m not even getting into the fact that for years now we’ll never be able of think of that name again without the picture of Aamir Khan’s moustache taking shape in our head. Exhibit A for those of you who would like to know, the picture alongside the last extant portrait of the original Mangal Pandey.
For starters, there was not much documentary evidence about Mangal Pandey. All we were brought up on was the fact that he revolted against the cartridges given to his regiment, killed a couple of British officers, sparked off a revolution and became the first martyr in the cause of freedom. Sepoy Mutiny is what the British called it, the First War of Independence what we should call it, in the larger scheme of things. For what happened later went beyond the confines of Barrackpore.

Mangal Pandey – The Rising I feel has done more harm than good. With such a lack of actual facts, the filmmakers had to invent character such as Officer Gordon. You have Mangal Pandey drunk on bhang, cavorting with women, what not? All to stretch the film to the regulation 21/2 hours. The film leaves you cold, not even the cleavage-song makes you want to sit up. Even their extrapolations are not interesting hypotheses or valid theories of speculation, but insipid b-grade bollywood plotlines. And I wonder what Tantya Tope was doing in that movie. As far as I know they never met. And a 13 second cameo by Rani Lakshmibai of Jhansi did not help. (help! It’s Archana Joglekar. I thought se was dead)
Mangal Pandey belongs to India. To you, to me, to all of us. But in true Indian fashion, here we have the most frivolous of all objections to the movie – it makes no reference to the Mangal Pandey’s village of Balia.

And what the film did more was bring the focus on Mangal Pandey. And in our country we are not in a shortage of people who, at the drop of a topi, are ready to abnegate our culture and our heroes (which reminds me of what is being done to Prithviraj Chauhan, but more on that in a later post). The book ‘Mangal Pandey : Brave Martyr or Accidental Hero? by Rudrangshu Mukherjee is one such example. The contents of the book are not as objective as the title would suggest. At least he uses the word hero. And then there are others who would say that Mangal Pandey was the product of 1857 and not the other way round. Every fire needs a spark mate! And remember, there were others in the war if you have your history right.
Then there’s the school of thought that swears that Mangal Pandey admitted to his superiors that he was under the influence of opium when he did the deed. Sadly enough (good for me) there is not hard evidence to support this fact. “If Mangal Pandey was a true patriot, why was he in the army in the first place?” say some of our countrymen. I’ll not even answer that.
Like I said, we need our heroes. If Mangal Pandey was an Indian, then I am glad I am one too.

And on an interesting side note, I leave you with this. 2007 is the 150th Anniversary of the First War of Independence. A proposal was mooted that India, Pakistan and Bangladesh should celebrate it together. Vajpayee said at the 12th SAARC Summit, “Our forefathers fought side by side, transcending religious, regional and linguistic differences against a common colonial oppressor in our First War of Independence in 1857. It reminds us that many of us have a shared history which pre-dates our more recent divisions.” “Perhaps Pakistan, India and Bangladesh can together celebrate that anniversary in remembrance of our joint struggle against a common adversary,” he suggested.

If it happens, it would be great. But I’m not holding my breath.
Miaowed by Shenoy

Neither Am I..
BTW it was Varsha Usgaonkar..Archana Joglekar..??Blame the cat eyes..
-Anon