Halfway through the V for Vachowski movie, this not-so-whispered conversation was overheard from the group behind us:
“Dai, do you know who wrote this story?”
“No, Who?”
“Ah! The Tchaikovski Brothers!”
“Oh really?!”

Yes, in as many words. Just sums up the kind of people who think that V for Vacuity is a great movie. And the kind of people that V for Vacuum in their head newspaper reviewers seem to targeting by giving super Star status to V for Vapid. But let’s say you do manage to get it out of your head that V for Vandalised was based on a graphic novel called V for Vendetta, even then, even as a movie, V for Vomitus is a vasted effort and time. And as the credits rolled in after the endless torment that was V for Veak and as as I was V for Vailing, this appeared “Based on the graphic novel illustrated by David Lloyd.” That says it all. No Moore. And yes, the word ‘based’ that is the keyword.
Just goes to show that great books should be left to themselves, and should be read and imagined, not seen. Comics fall through the cracks, but still care must be taken. Great stories should be told, not shown. Unless of course you happen to be Shankar Nag. Which nobody is. So leave them books alone. V for Venting Spleen over. And just in case you thought the movie totally and completely killed V for Vendetta, i leave you with what V (the real V, the one in the book has to say about the movie and his treatment thereof): 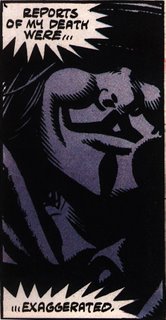 V lives. Because ideas (and great stories) are not just bullet-proof, they're also hollywood-proof. V lives. Go. Read the book. And look out for this panel. Read. The truth will set you free.
Ave atque vale

harish bijoor was my branding teacher and he was awesome with his stuff...

why, ? any different opinions ?

Bekku, Cant understand what Mr Rajiv was trying to convey. My bet is that Rajiv was typing a mail and typed this in ( Or is it you putting in self praise :-) )Anyways, I would look at the movie in the below manner. The movie was made in a manner that even people with IQ less than 30 could watch it, Comprehend it and glee over the fact that they have watched a classic.(Me Included). Infact, I watched the movie yesterday. I was thrilled to the Sub 30 IQ citizens enjoying the movie. My neighbour on the right was laughing aloud, passing comments ( One about some bandit) and generally having a good time. I was also particularly pleased with this gentleman because after a long time I found real competion in the Great War for the Arm Rest. He was

May I pray that the likes of Tchaikovski Brothers(Please do not confuse it with the great Wachowski Brothers of Matrix Fame)thrive and prosper for they make movie watching fun.

One more angle, I think the Great Wachowski Brothers are suffering from Schizophrenia. In fits they made a classic called the Matrix and now they associated themselves with V. Well lets hope that we see their genius in they next movie

Hey An-Knon, you lose the bet. It was neither a mail that rajiv typed in or (how could you even think?) that I wrote that in my own praise. I know rajiv and I also know that he got to theBekku first time yesterday. He was just commenting on what he saw, and also included a bit about postSecret. Not a crime is it? And the harish bijoor bit, well that was in reply to a comment I’d left on rajiv’s blog. Check out the proof at http://www.blogger.com/comment.g?blogID=20397642&postID=113838149017017510
Hey An-Knon, be careful next time you accuse theBekku of cheap tricks and unethical practices eh?

Hey an-knon anonymouse, glad you enjoyed the movie. see ya around, V for Vermin.

Tchaikovsky Brothers??? Gihahaha. V for Vachowski indeed. The movie left me feeling V for Vindictive. Was wondering V for Vhich Vay to the Exit. And, as you say, "based" is the key word, just like it ws for "I, Robot", which was V for Vaanthi :-P. Still, cast your mind back to the wasteland that was the From Hell movie and our composer-siblings' effort seems quite herculean. Now let's just hope that the Watchmen movie takes these graphic novel adaptation flicks one step closer.

So making movies for cretins is laudable exercise. Aweosme.I hope you'll excuse people with IQs in the three-figure range for not being amused that we have to swallow the same pabulum as the 'tards.

Oh it most definitely is. making movies for cretins that is. You see nowadays, more than the theatre screening, movie studios make more money through DVD sales. now people such as yourself will never buy DVDs of crap movies such as the one being spoken about. But cretins will. y'know what they say? a fool and his money are soon parted. and DVDs cost money. there you go. and needless to say, you will have to swallow the same shit as 'cretins' because you're hopelessly outnumbered in the "independent thought and opinion" department. so there you go making movies for cretins IS a luadable excercise, so what if it is the stupid electornic media and Bangalore Times that is lauding it. you're outnumbered, outgunned, and out of the hallowed circle that is the sub-normal, page3 intelligentsia. think. if not for people such as these, would Coldplay have existed? would coldplay have been the top-selling artist of 2005? think. you can. they can't. that's what makes making anything for cretins a laudable exercise.

check this out people: http://aforanarchy.com : An Anarchist response to the theatrical release of V For Vendetta

All the above being said, though, I just can't argue with Street Fighting Man as the closing song :-).