Most people know now that the word ‘Hindutva’ was Veer Savarkar’s contribution to the lexicon. But there exists a word, though not often used, which gets geographical when it comes to the Hindus. That word is Hindudom. Though rarely used nowadays, this word means the geographical spread of our land, and beyond just the artificial boundaries that we have to live with today. And the originator of this word was a lady called – Savitri Devi Mukherji nee Maximiani Portas, also nowadays popularly known as Hitler’s priestess.

My association with Savitri Devi, if I may call it that, began in one of the many narrow and busy bylanes of Banaras somewhere by the Ghats, when I chanced upon this small book with the title “A warning to Hindus”. Today I thank my lucky stars I picked it up, because this small 1939 treatise has long been out of print, and the history of the book and the times Savitri Devi was living in, and the people she was in touch with, and her ideas about India all come through, nay shine through in this book. Her reasons for coming to India and her love for the Hindus might be construed as a little misguided, which to a certain extent it is, but no one can deny her love for this land, and especially for its people. “Europe is merely powerful, but India is beautiful” she said. She and her husband, Asit Mukherjee, also played the roles of spies during WWII passing on information about British officers to the Axis, and interestingly enough, played no small role in bringing Subhash Chandra Bose in contact with the Japanese. A polymath, a philosopher, a prolific author, spy, orator – Savitri Devi was all this.
To a large extent, Savitri Devi was also responsible for the origin of yet another interesting term “Hitlerism”, which in short is the metaphysical/ spiritual expression of the Führer ideas and philosophy or in other words NS mysticism. This being the case, she is also known as The "Mother of Esoteric Hitlerism".

To know more about this intriguing personality, go here. 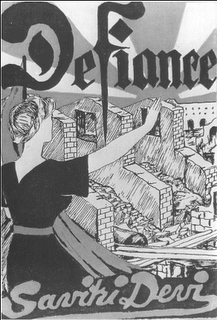 Weirdly, a friend just lent me a book about her. Let you know more once Iread it.

Wierdly? or Coincidentally? And if I am to hazard a guess it would have to be Goodrick-Clarke’s ‘Hitler's Priestess’. It’s a nice one, neatly outlines and the details her fascination with Akhenaton, and her books. Nice.

That's the one! Another Shenoy lent it to me.