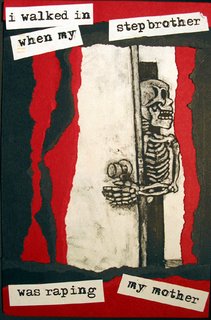 Best American Weblog, Best Topical Weblog, Best Community Weblog, Best New Weblog AND Weblog of the Year : One blog won all this at this year's Weblog Awards: the 2006Bloggies. It's billed as an ongoing community art project where people mail in their secrets anonymously on one side of a homemade postcard, and it's called PostSecret. These secrets can be anything and you should see some of the secrets that people send in. Makes you think. Frank Warren has also seleceted some of the "best secrets" and published it (other people's secrets which they shared with him) in a book. Makes you think. So, what secrets do you want to get off your chest? Ah yes, the postcard shown above by the way, you won't find on the blog. It's now in an online gallery. Makes you think.

Thank You bekku for working on my suggestion. You sure take care of your fellow Bloggies

what suggestion is that if i may ask? i don't remember no suggestions about this post from nobody. and anyway, there are somant anonymouses around, can't reallys say can we?

Oh! Sorry. You meant the open-in-new-window-hyperlink. Yes mate. That was yours. To many anonymouses happening man. And thanks for the suggestion. Due to tat now I know a little bit more about HTML coding and hyperlinking.