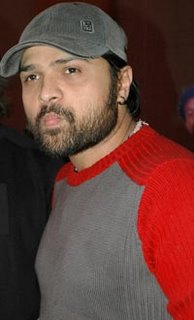 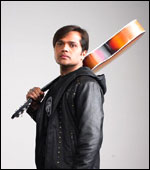 We wish you all the best sir. Jai Mata Di! Let’s Rock!
Miaowed by Shenoy

Dude, what happened to your taste?

dude, it's a form of writing called Sarcasm. and what you've just exhibited is a form of Sarchasm, which is "The gulf between the author of sarcastic wit and the recipient who doesn't get it." hehehe.
anyway, while i'm heaping scorn on Himesh' ubiquity, i quite actually think he's not that bad. and taste? well i guess taste went out the window the day Audioslave started singing Jack Canfield lyrics. :) but not to worry, point taken.

Just one more things man, it’s just that too many anonymouses are happening nowadays. Wish at least you would pick some nicknames for yourselves. Please do no? moving on….You see, I know enough of those people who think it’s uncool and tasteless to listen to any form of Indian music, or to put it this way anything with Hindi (or Indian language) lyrics is to be totally avoided and even the knowledge of such music should be eradicated from our minds. And theBekku frowns on such people, and hates them not. So are you one of those people who think that listening to our music is tasteless? And was that what prompted that question? Or were you just commenting on Himesh Reshammiya specifically? You see, I like music. And sometimes even the bad music. C’mon I’ve even listened to Ironmaiden and Coldplay. There are right now 114 files on my Winamp playlist…and I reproduce them here as it is (with all its inherent duplications as I just enqueue songs going by my mood swings)…so while I’m grooving to Karmacy’s Blood brothers…here it is. Take a look and please do tell me what’s tasteful in all this or otherwise.

Shenoy said...
This comment has been removed by a blog administrator.
March 31, 2006

and no mate!! even i can't handle this much in one day. this is about two day's worth.

I actually didn't read your blog. The image glared, repulsively.

The image glared, repulsively? i guess al_lude has already answered why.

The Man's fame is spreading - India Today have done a nice big article on Him and His rise to fame in this week's issue.