Isles of the Dead

This is a painting called Isle of the Dead. By a painter who was acknowledged as a master and an influence by none other than Di Chirico himself. 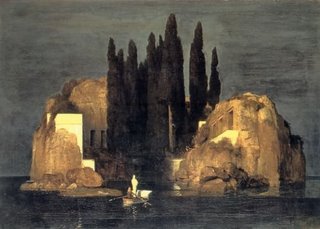 And this is the supposed homage, a variation of the painting above. By a great modern artist. 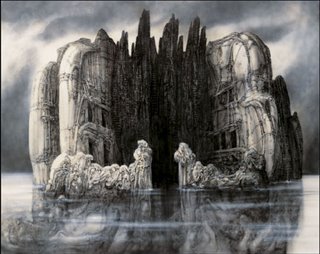 Just goes on to show you that no matter how brilliant and original the person – doing the 'cover' so to speak – is, he can never quite capture the emotions, the stories, the torment and the tranquility that the original artist captures in his creation. And all of it and more that went into its creation. In this case, Arnold Böcklin, whose original doesn't so much tell you things as much as it invokes ineffable emotions. While the 'cover' that is so cold, so precise and so impersonal is surprisingly by HR Giger. Yes. HR Giger.

It is not about technique, not about mastery or skill, but about what the creations is saying. The person who is covering may have his heart in the right place, but still. And speaking of covers and reworks that don't quite get or convey what the original says reminds one of that great song Diamonds and Rust. And in this context worth a mention, as another case-in-point. Originally by Joan Baez, D&R was her song about Bob Dylan. Which she wrote after they broke up, and the song that captures her hopes, her pains, her heartbreak, her love and hate and her fond and not-so-fond memories of Dylan. Ok? And then there is Judas Priest. Acknowledged masters of their art. The masters. And they cover Diamonds and Rust. Metal-ify it, so to speak. Nothing musically wrong, but can Priest's cover ever cover even half the territory and the emotion of the song? What were they thinking??? What was Giger thinking???? So there you go.

And speaking of variations, it is best left to the original artist himself. Like nobody could or can do better variations of Isle of the Dead than Böcklin himself. Just like Pearl Jam. No one covers or can cover Pearl Jam songs better than Pearl Jam themselves.

I quite disagree. Geiger's works always strive to impart a certain cold, dehumanised feeling in the viewer. Bocklin's work is more romantic/nostalgic (perhaps he shared De Chirico's occasional wekaness for sentimentality? In either case, I like their work), while Geiger comes from a more nihilistic, bleak, almost Lovecraftian apprehension of reality.

Again, as a counter to your Priest exampl, how about Nevermore's rendition of The Sound Of Silence? It's pefect, faithful to the feeling of the original while bringing in a certain despairing rage that is Nevermore's own. And you can hear the original and the cover back-to-back with no cognitive dissonance at all.

The jazz and blues idioms are especially full of excellent covers. when done well, it is not meant to be the same as the original, but different in a valid and worthy manner.

So, nope, I'd have to disagree with your conclusion that 'variations...(are)..best left to the original artist himself'.

Ahem! I quite disagree JP. (scratches head…where does one begin?)

Let me put it this way…
“…As I remember your eyes, Were bluer than robin's eggs, My poetry was lousy you said…Where are you calling from?...” or
“…Our breath comes out white clouds, Mingles and hangs in the air, Speaking strictly for me, We both could have died then and there…” or best of all,
“…It's all come back too clearly, Yes I loved you dearly, And if you're offering me diamonds and rust, I've already paid.”

These are some of the lyrics from Diamonds and Rust, deeply personal lyrics written and sung by Joan Baez who was singing about a man Robert Zimmerman a.k.a Bob Dylan. Can you hear the hurt in these words? Can you see their history together that she so poignantly sings about. So tell me, do you honestly think that the bunch of grown men viz. Judas Priest running riot with these words have captured the longing and the pain and the hurt that was in Baez’s original? Last time I checked, none of the boys from Priest were ever in love with Dylan and none of them had slept with Dylan or had a heart-breaking experience that D&R sings about.

You said, and I quote, [a cover] is not meant to be the same as the original, but different in a valid and worthy manner. Yes, Priest’s Diamonds and Rust is different. But tell me, is it valid? Or worthy? I have the highest respect for Priest. But not in this particular case.

But you see I digress. Because you did. How? I was not saying that I am against covers. Heck! I enjoy covers. Freak out when a great one comes along. Which is where your Nevermore’s rendition of Sounds of Silence is misplaced. You see, I was clearly talking about, and I quote from my original post…“And speaking of covers and reworks that don't quite get or convey what the original says…” And on this point I think neither Priest (with D&R) or Giger (with Isles) got what the original artist was trying to say. So Nevermore’s Sounds of Silence is not a valid counter-argument.

And yes, while we are on the topic. Let me reaffirm. I think HR Giger is a great artist.
And let me also clarify what I said when I meant when I said, “…speaking of variations, it is best left to the original artist himself….” And although I do not mean the same thing when I say “Variation” and “Cover”, I guess they are a little interchangeable. I apologise for any confusion caused. You see, I have not your penchant for words nor your vocabularical virtuosity so there is always a small chance for Transmission Loss when it comes to the simple words I use and their meaning/interpretation thereof.

Which is why as much as possible I try and provide a context almost immediately to clarify and crystallise what I mean. Like in this case, the sentence above was immediately followed by “…Like nobody could or can do better variations of Isle of the Dead than Böcklin himself.” Methinks I need to work more on my structuring. Anyway, to clarify what I mean by “Variation” and “Cover”, I will use the illustration I used to support my argument in the post, viz. Pearl Jam. When Pearl Jam sings Even Flow today, it is a variation. When anybody else does, it is a cover. But Pearl Jam’s Even Flow today is so much different (almost as if the song has grown with the band), it almost borders on being a cover. And nobody can do it better than Pearl Jam, just like no one can do a better Variation of Isles of the Dead than Bocklin. So all things stated, variations are still best left to the original artist. I should have also added that “if it looks like the imitator is not “getting” it.

my bad. see what happens when you try to say too many things too soon? talk about short posts!!!

And just one last thing, I do not think sentimentality is so much a weakness, as it is about being human, all too human.

I think you're being rather subjective about the Giger painting - it's an image that haunted my imagination for quite a while, for instance. I also think you're building your argument in a rather skewed, going on in excess detail about supportive examples for the rather extreme conclusion that 'And speaking of variations, it is best left to the original artist himself. '. All said and done, that simply can't be true. Human creativity is a continuum, not a mosaic of utterly disparate and isolated shards of creativity.

Your own modfication ' I should have also added that “if it looks like the imitator is not “getting” it. ' undoes your argument. All you're really saying is that works of art, sonic or otherwise, that you like should not be re-worked in a manner that does not satisfy your personal aesthetic sense. I can sympathise with that (I hate that those St Germaine robots can use John Lee Hooker samples), but I do not see it as anything but a statement of subjectivity. These are your views, and I respect them, I might or might not agree with specific instances, I will defend your right to express them, but I will not support your drawing a universal conclusion that is in fact not valid or applicable. Ta-dah!

(There's sentiment and there's sentimentality. I sometimes suspect Chirico of falling over that line, but that could very well be a function of my innate distrust of emotion.)

Get any Desired College Degree, In less then 2 weeks.

Get these Degrees NOW!!!

Get everything within 2 weeks.
100% verifiable, this is a real deal

Act now you owe it to your future.

And like always, we agree to disagree. Subjectivity rocks!!

Ahem! Objectivity has its advantages also.