A reply – and a thank you note – of sorts 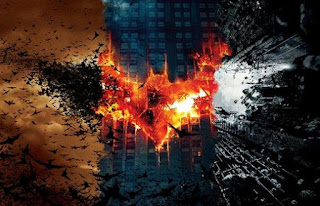 Many many moons ago, a die-hard motor-head and F1 encyclopedia who happens to be a friend of mine (yeah Ajit, you only man, and thanks for the quote) mailed across a great quote that I’ve never quite forgotten. Looking it up took me to an olde episode of BBC’s Top Gear, in which Jeremy Clarkson test drove – I don’t quite remember, think it was – an Aston Martin. But the point is this. After a fabulous drive and gushing praise, he mentioned a couple of small minor details that people said could be improved upon, and to such people who complain because they want to, Clarkson said, in a way only Clarkson can, “Complaining about this car is like getting into bed with a supermodel and complaining she has slightly irregular pubes.”

How’s that for a reply to the people who would go nitpicking for the sake of it, about The Dark Knight Rises, things like ‘why are the cars marked GPD when it should be GCPD as was established in a scene in the previous movie?’ I could’ve at least given marks for this kind of an observation if the city in question was say, Kuala Lumpur and they’d marked the cars KPD, not KLPD.

Then, on to certain plot points in the movie which a friend of mine who goes by the handle Finnegan’s Wake fabulously called the ‘Manmohan Desai elements’. Things like ‘how Batman could prance around after being lame for almost 40 minutes of the movie?' (errr...perhaps that metal frame thingy on his leg?) and ‘how could a quack fix wayne when he had disfigured Bane while trying to treat him’ (no he didn't. the guy who fixed him was someone else. the quack who disfigured bane was the guy who suddenly starts speaking propah English after mumbling around in some strange language). Oh wait, there’s another Manmohan Desai element (I love that term!).

If that explanation wouldn’t suffice those for whom there is no pleasing, then I offer you the recourse of what Coleridge termed ‘suspension of disbelief’. And the burden is on the viewer, not the creator. If you can suspend your disbelief enough to believe that is perfectly plausible for a grown man, who is also a billionaire by the way, to run around in a suit wearing eye shadow with out of the world gadgetry (and in the comics world, friends with an alien boy scout who flies around wearing his red undies outside his blue tights), then why is it so impossible for you to believe that such things too can happen. ‘Clean Slate’ can fit into a thumb drive. Why let it come in the way of ‘the larger enjoyment’ of the film? Remember it’s a movie, not a balance sheet.

If you want everything to be perfectly explained and everything slotted just right, with no facts out of place, then I suggest you go check out the CERN ppt on the Higgs Boson after the big find. Plus, it’s in Comic Sans.

The other big complaint is the supposed lack of humour. While I can counter that by saying there was just enough humour to get by, like the rooftop sequence where Catwoman does a Batman on Batman. Remember Batman is supposed to be this fatalist, brooding dude. And the whole tone of the movie is dark and somber. It’s TDKR, what were you expecting, an Adam Sandler movie with Marx Brothers dialogues? And less humour or no humour compared to what? Perhaps putting nipples on the batsuit would’ve helped, yes?

That said, do I have no complaints against the movie? I do. I wish Nolan had given more screen time to Catwoman. In tights. Not Selina Kyle. Catwoman. But then, Nolan’s only human. Don’t expect him to get everything perfect. Did I hear someone say fan service? Yep. So is asking for Bane to be given more screen time too and a fitting ‘death’. But remember what Clarkson said about sleeping with the supermodel?

Now that all that is taken care of. Let’s move on to the Trilogy proper. Because many tend to forget that TDKR is but the final part of a Trilogy. As Satyajit Chetri aka Beatzo has nailed it, “For the first time in the history of this 73-year old character, we have a complete story, with beginning, middle and end.” If its comics and beatzo speaks, question it not. And that statement above – which I completely agree with – is more objective than you would care to admit.

Oh wait. Speaking of comics, there’s enough people out there who would revel in showing off their Bat-knowledge – and thusly seem cooler somehow – by suggesting things like ‘they should’ve let Talia live because she’s pregnant with Damian!’. Damian who? Aw c’mon dude. You don’t know? (gets into let-me-out-fanboy-you mode with fake humility mask) In the comics, Bruce Wayne and Talia al’ Ghul have a kid called Damian Wayne who then becomes the 5th Robin. What…5th Robin? Ya man…blah blah Jason Todd blah blah Drake blah blah Stephanie Brown blah blah Red Hood blah blah. And so on. Dude, stop it.

Nolan’s mined the best parts from the comics, most notably the tone and motivations and characters and delivered a nice self-contained trilogy. Everything that needs to be there is there. It’s not comics. It’s Nolan-verse. And it’s just as valid as Timm-verse or DC-continuity. If there’s no venom pumping into Bane’s veins, it just isn’t. And if some white haired dude in some Pit replaces Lady Shiva, so it shall be in Nolan-verse. Every medium has its own pace, it’s own possibilities and limitations. Be thankful for what you got, and the awesomeness that was the experience across the Trilogy and quit comparing it to the comics, and to Arkham Asylum the game, and……how in TDKR Catwoman should’ve gotten more screen time in tights (oh wait, that’s me.) So if you want to want a nice conversation about possibilities and batman comics, that’s cool, but if you’re just out to prove how many Batman-related Wikipedia pages you’ve mugged up and throw trivia around without a context, you can please stuff it down Jean Paul’s valley.

So there you have it. TDKR, a fitting finale to a fabulous trilogy. A trilogy which has set the standard for comic book adaptations. A trilogy that humanised the ‘superhero’. A trilogy that transcended the comic-book-movie genre. A trilogy that gave us Heath Leger’s Joker, a killer bat mobile, Hans Zimmer’s scores, Anne Hathway in leather, a great supporting cast, great dialogues, great action, Anne Hathway in leather, and above all a nice cohesive and a sooper movie experience, three times over, not counting the umpteen repeat viewings. I know I am not even scratching the surface about all the things that were superfantabulous about the Trilogy, like the new bat-logo, but then, I’m sure you know them already and I’d have to take a day off to type out the whole list.

So in closing.
Thank you Christopher Nolan.
Miaowed by Shenoy