Return to the Sun 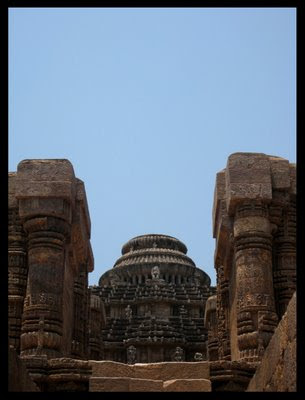 A split second after the awe and splendour hits you like a ton of red sandstone bricks, two blinks after your jaw hits the walkway at the splendour of it all, it is replaced by a sense of regret. That you were not there to see it in all its glory. Regret that slowly turns to anger at all the invaders and conquerors who’ve swept this land demolishing structures (read temples) in their wake and in their territory. The ‘eminent historians’ will tell you it was all political expediency. Nothing personal. But we all know what their motivations were. The anger and the regret never really goes away as you walk through whatever that remains – in awe, wondering about the artisans of a bygone era and marvel at the heights of their achievements, in architecture and engineering. Poetry in stone. The echoes of a lost art and culture.

One such is the Sun Temple at Konark. The mythical magnet of legends may no longer be there, but there is something about the place that makes you want to go back. So i did. And the regret i felt the first time around was still there, amplified even.

If you go by the massive structure that stands today, one can only imagine what the complete temple would’ve looked like. A colossal temple to Arka, the Sun God constructed like a massive chariot on twelve pairs of exquisitely carved wheels pulled by seven pairs of horses. Thankfully many of the wheels still remain with their details intact. But almost all the horses are gone. Just about two broken horses remain of the seven pairs. One pair of each for each side. So when you look at the temple in profile, you see the seven horses pulling a twelve-wheeled chariot. Here’s an image composited from two photos i took this time around that i hope will give a general idea.

Each of the wheels is study in itself. Each an exquisite clock byitself. Each of the spokes carved with intricate details and twelve stages in the wheel of time and life. Take a look at these wheels. Take a close look and you will see that the pictures were taken a shade after twelve noon. The first pic is a personal favourite, the most enduring image that it is of Konark. 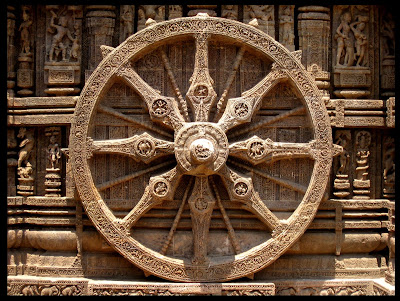 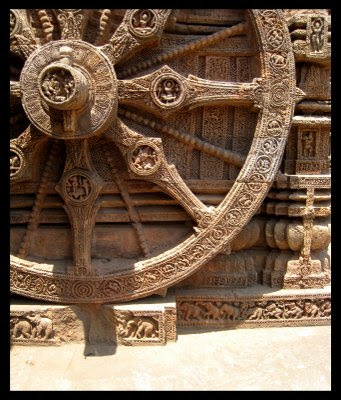 The main tower, the sanctum – or the Deul as it is known – is gone. Fallen because the archstone was taken away. Or destroyed most likely. Only the Jagamohana remains. And that is what one sees dominating the skyline as you enter. But that’s not all there is to the Sun Temple. Hundreds of carvings, big and small, worldly and spiritual. And of course the highly instructive erotic carvings that ring the Deul’s second level. One could on and on writing about the Sun Temple and the majesty of it all. The stories and legends. The myths and the harsh reality. But seeing is believing, so here are a few random pics that but, hint at what awaits the traveller who makes his way to Konark. As i did. I could go on, but i’d rather speak about in person.

Three visits to the temple in two days. Noon, night and dawn. On my second visit to Konark. I have a feeling my tryst with Konark has still a few chapters more to go. And then will the final word be written. Till then, here a few thousand words in low-res pictures. In the language of stone, spoken by the magnificent men and artisans who make me proud just being born in the land they once trod upon. 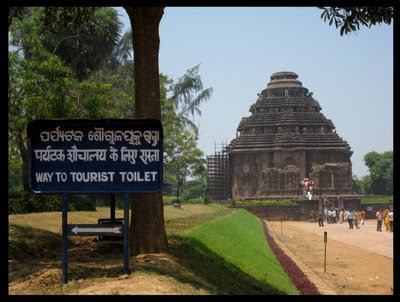 There's even a 'tourist toilet' there in case you were looking for more reason to go there. 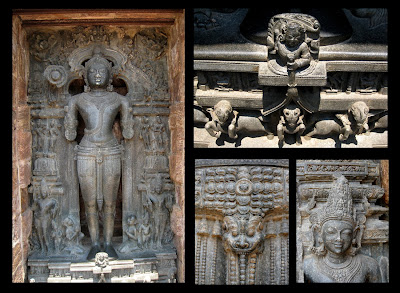 One the statues of Surya, the Sun God. One of the few still in relatively good shape. Not the idol. Nobody knows for sure where it is or what happened to it. What's an idol without a sanctum. Anyways, to the left is the statue in granite of Arka in his chariot . Top left is a detail from the lower portion of the statue depicting Garuda's brother, Aruna, Surya's charioteer with three of the seven horses whose reins he holds (in the main statue exactly between Surya's feet). Bottom left is a detail from the waistband of Surya. To the right is a detail of one of the attendant dieties you can see at Surya's feet. 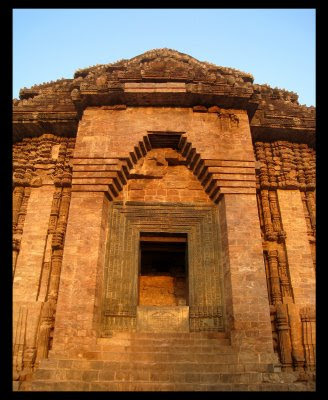 Above: The entrance to the jagamohana. Unfortunately, there is nothing to enter into. The inside has been filled up completely to prevent the structure from collapsing in on itself. Many many grateful thanks to The Hon’ble J.A. Bourdillon, C.S.I. Wondering who I’m thanking? Well. The granite plaque you see in the doorway reads, ‘To preserve this superb specimen of old Indian architecture the interior was filled in by order of The Hon’ble J.A. Bourdillon, C.S.I., Lieutenant Governor of Bengal A.D. 1903." Thank you sir. 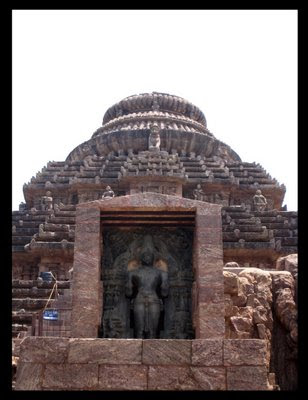 Above: Another statue of Surya, facing westwards. 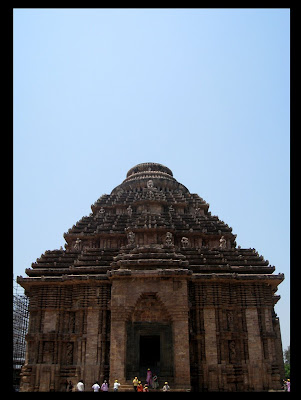 Above: The jagamohana, which is the only major structure left. With day trippers in front and at the entrance. Look at the scale and marvel. The deul, or the main tower which would've been behind this was a lot more bigger. But sadly. Below: The Jagamohana just after dawn. The photo above was at about 1pm. 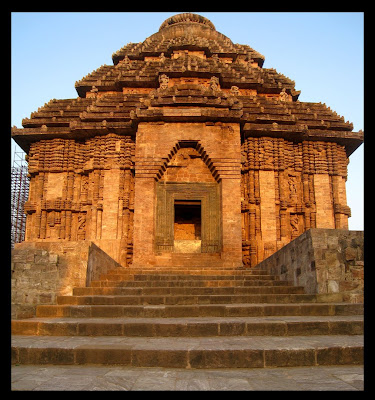 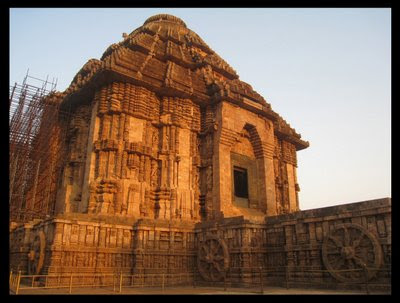 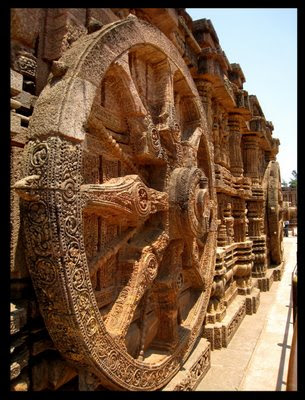 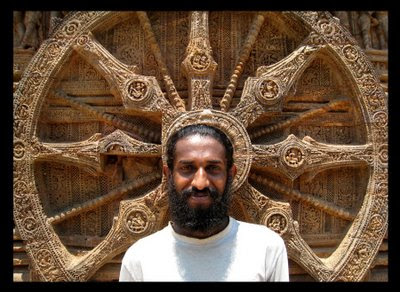 Above: Jubin 'waiting for a class-less state-less world' George, partner in crime this time around in front of one of the wheels. Lest you think that the wheels are small and man-size, here is some scale for perspective. Below: A composite of three images, look closely and you will see Jubin closely studying some detail on the walls to the left of the steps. Can't see him? No matter. Take a look at the composite below this one. That should give you the scale of man to wheel.

Above: The stones seem to change colour depending on what time of the day you are there. Remember that photo above (the personal favourite one). The one on the left. The photo was taken noon-ish. The same wheel a little while later. Below: Another illustration of the same point, this time with two different wheels on the same side of the temple. 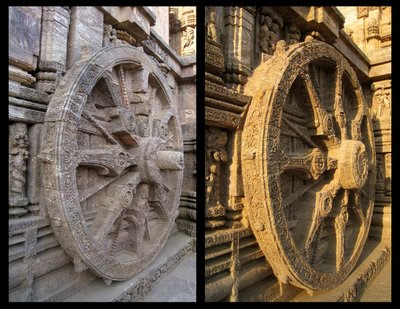 Oh. There are many more. Like the words i could write, the visages that the Sun Temple presents you with – multiplied by the number of times you visit it, and what time of day you visit it in – are many. The 'erotic' sculptures. The small details and dieties. The natya mantap. But why overdo it? Go there to really experience it. But before i bid adieu for now, one last view of the the Sun Temple. One last look through the massive lions, across the natyamantap to the jagamohana. Once as the sun just makes his presence felt, the other when he is elsewhere than at Konark. 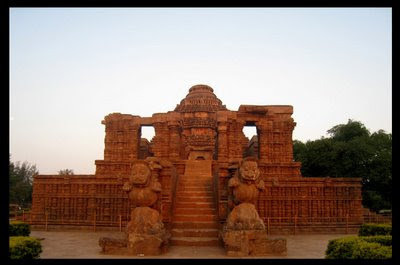 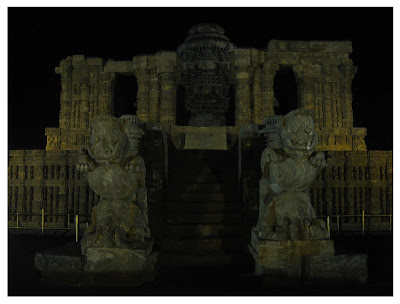 This place is just amazing!
A well written post as well - am sure it makes every reader want to visit the place.

Did I get it wrong, or did you actually visit the temple thrice? - morning, noon & night

Thanks Sam. So. when are you going there?
And yes, you got that right. I stayed overnight at Konark, so i could go there as many times as i want. Ended up going there the afternoon i got there, at night and the next morning at the crack of dawn. On that day, i was the first person inside.

Very well written! Brilliant composites too, that too of pics taken without using a tripod! And the pics at the dawn do justice to what eyes could see.

Just for the factual accuracy, it's not 12, but 12 pairs of wheels. And as an additional info, the deul was taller by 100 ft. than the jagamohana! Imagine!

The eminent historians also say that destructing structures (read the pinnacle of spirit and glory of the invaded land) was part of the practice of the land, and alien conquerors just followed the tradition. That of course doesn't lighten the gravity of the crime, but just expands the scope of criminals. :)

And I swear that I saw a red flag with a sickle and star on it fluttering above the lingaraj temple!

Thanks Jubin. Will dump the rest of the pics in a cd and give to you as soon as i escape the inertia of lethargy.

Yeah, it is twelve pairs of wheels. When i said 12 i was referring to the profile view.
And 100 feet!!! The deul would've been something else man.
(the anger is coming back!)

Speaking of anger, 'the practice of the land' is the emininent historians' own thesis with no support in reality. they just made it up, used exception, if any, as the only rule, wrote it like was documented history so that they could then use it as a reason to 'expand the scope of criminals', thus softening the blow, rather than speak the (so-called) fundamentalist truth, and thusly in the end exculpating the real ‘criminals’, absolving their true motive and in the end even trying to rehabilitate people like Aurangazeb, who i understand is now amongst the most politically astute and benevolent (within the limits of political expediency) emperor who ever ruled this land. Making history ‘secular’ as is their agenda.

An no! It is not the hammer-and-sickle on top of Lingaraj. You wish :-) But then, that would make communists theist wouldn’t it? Anyways, i have the photo to prove it, it is a red flag yes, but made up of two triangles (much like the national flag of Nepal), with what i think is a sun and a moon in the triangles (again, like the Nepalese flag).

Awesome ! Very well written and the photos complete the picture. Keep up the good work and keep wandering.

Wow! Reading this piece made me want to go to Konark. Now!. Well written Shenoy and fantastic pics as well. You did justice in capturing the nuances of the magnificent monument. Keep up the wanderlust!

sooper pics and so is the blog

The cat is curious indeed.

Enjoyed reading a very well written piece. Somehow makes me feel good that there are still such wonders and people out there.

Keep up the good work as and when lethargy permits!!! ;-)