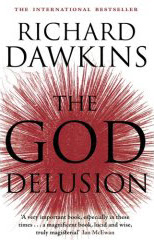 Description: The book that heralds the new Messiah of Atheism, Richard Dawkins.

Would’ve been better off as: A short essay of not more than 5 pages long (printed on one-sided sheets)

Darwin’s rottweiler Richard Dawkins his sights on God and religion, and foams at the mouth for over 200 pages without saying anything substantial. A Dawkinian Manifesto against Christianity and Islam, the author brings to light no new argument, and even more so, no new facts. This is not the same as loading the book with loads of factoids and interesting pieces of news. At the cost of being called crass, one is tempted to theorise whether this paperback is the result of some sort of childhood trauma, or abuse from some priestly pederast perhaps? Or even worse, may be the whole point of the book was to be condescendingly patronising towards NOMA and S.J. Gould. So often are his ‘friends’, Daniel Dennet and Steven Pinker quoted, cited and named, one is surprised that the names of these lapdogs no not appear credited as co-authors. All in all a waste of time. For those that are atheists already, this book offers nothing, and anyway you’re an atheist already, which is what Dawkins sets out to turn the world into. If you’re an agnostic, well…again nothing new, except some fancy terms and scales of measurement. If you’re a Christian or Muslim, and you believe enough, you’re going to hate this book anyway. Now coming to Hindus (for lack of a better word). If you’re a Hindu, well…there’s nothing in it. You can be a rationalist, theist, atheist, agnostic, spiritualist and yet be a Hindu, so this book offers nothing new. And also, neither does it mention anything about the eastern systems/religions/spirituality. Which also by the way makes the book looks like it was written by a dilettante. But then again, it could well be so. For it is not so much a manifesto against religion, as it is against religious fundamentalism. To get into a point by point refutation would be a waste of time, and I for one, do not think this books deserves that sort of attention. The only fear is that this worthless book will bias people against better books by the same author, which are at least thought-provoking. This one just provokes you into reaching out for Dawkins’ neck. If only…

Best recommended for:
- Those that want other people to think they’re intellectuals
- People who want to carry around a book that’s the flavour of the month (again, for reasons stated above)
- Those people that don’t like Dawkins and just need more reason to ridicule him, which he does so on a platter
Miaowed by Shenoy

'your highness' will do just fine.