Did we need another ‘contemporary’ riff on Sherlock Holmes? Maybe yes (always!). Perhaps not. But looks like America surely did. Or rather, American network television did. If only to set it in NYC. What am I referring to? Elementary, my dear reader. Elementary – The new TV series from CBS.

Of course, Sherlock Holmes in a contemporary setting is nothing new. Or call it a pastiche if you will. And I’m not that much of a purist Sherlockian to not enjoy say, The Mandala of Sherlock Holmes, or even a Sherlock Holmes Vs. Dracula. But those are the one that defer to the canonical Holmes as created by AC Doyle. Like BBC’s Sherlock for instance. But not Guy Ritchie’s Sherlock Holmes, which was quite the fun movie(s) but the fact that two lead characters were called Holmes and Watson were just incidental. They could’ve been called Tom & Jerry and it would matter not a whit to the movie (or rather the franchise). 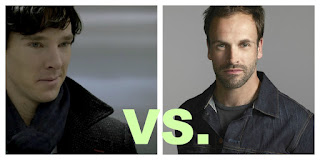 Coming to Elementary. Call it a case of bad timing but the comparison was bound to happen. With Sherlock. Who’s suave, cold, impersonal, impatient. Complemented well by a Watson we find oh-so-familiar. Written well. Enough and more nods to Doyle’s canon. Change the names of the two lead characters to Tom & Jerry and it would still be great Sherlockiana with all its clever details. No, not just great Shelockiana, but a very enjoyable television series with great acting, good plotting, writing and setting. It has all the influences of many new-ish British TV series, but Sherlock is beyond a shadow of doubt, Holmes. Now that’s how you bring Sherlock Holmes into the 21st century, post-twitter era. And yes, he lives at 221B Baker Street.

And what do we have with Elementary? A recovering drug addict with father issues and looked after by Papa’s money. Who has thrust upon him (not literally, not yet), a sober companion arranged for by Papa to ensure bad son doesn’t stray again. A companion called Joan Watson. No, that’s not a spelling mistake. Watson is a woman. And a masterstroke. Unfortunately this hasn’t gone much further than that, because it’s played by Lucy Liu with all of her repertoire of two-and-a-half expressions, with her half-pursed-lips-and-furrowed-eyebrows look being one of them. One can only wonder at all the opportunities that will be lost in making Watson a woman, if the pilot is anything to go by. And considering this is American primetime television, which has the uncanny ability to ruin a good thing with its ability to turn anything into practically a soap opera, this has all the hallmarks of going down that road. Case in point, House MD, Big Bang Theory, in recent times. One could be forgiven for thinking that the only reason they made Watson a woman was to have a will-leave-you-begging-for-more season finale where Holmes and Watson kiss.

Elementary feels and flows more like CSI or even like Monk for that matter. Again, change the names of the two main characters to Tom & Jerry, and it would still not change things much. No, that fleeting, forcible inserted reference to Holmes as an apiarist doesn’t count. Nah.

The very fact that I can't think of anything complementary or given my biases, contemptuous to write about Holmes in Elementary just tells me how generic a character he is. Typical, cookie-cutter new york detective types. The only remark I could make here is how fabulously unremarkable the character is.

That said, will I stop watching Elementary? No. I am a sucker for crime and detective yarns. I guess I will watch it till it officially turns into a soap opera or Lucy Liu’s irritating expressions get too much to take. But I’ve heard there’s a Seven Percent Solution for that too. And Sherlock Season 3 couldn’t come too soon!
Miaowed by Shenoy

Email ThisBlogThis!Share to TwitterShare to FacebookShare to Pinterest
Labels: much ado about nothing

I got to see the BBC one and it was indeed an enjoyable watch. Totally in love with Jim Moriarty!

I have been blogging about this same topic for nearly 2 years now, - what I have always believed is that it needs time to work to be able to overcome in this particular thing. But when I read your post, I was really amazed that there are many ways to go about it and acquire and even much better final results. Maybe that is why I've not really had a great number of loyal readers. I ought to have consulted your website first before starting my very own.

I really like and appreciate your post.Thanks Again. Keep writing.

This is an awesome post.Really very informative and creative contents. These concept is a good way to enhance the knowledge.
clipping path service