Killing two birds with one book

Remember the first Ice Age movie? It was an animated movie, so naturally it was billed as ‘entertaining fare for children’. And enjoy they did, going by my nephews and nieces or children of friends. But you know who enjoyed the film more? The people who used to be children till a decade or more ago, and some who are children still, albeit with beards, moustaches, wives and credit card debts. So while Ice Age was great fun for the child in us – and I don’t mean this in the sense of being pregnant – it was great pun for the adults that we supposedly are. Adults in terms of having read enough, gone through life, watched enough movies than the average bear cub. The puns (taekwon-dodo!) , the contextual insinuations, the absurdness of dodos preparing for the ice age with just three melons (melons, as in the fruit, you dutty bugger). See what I mean. It takes an adult to get that joke. You can’t expect a 10-14 year old to get all of that. But that’s not to say they didn’t enjoy Ice Age. That’s where we ‘adults’ have an advantage – we used to be children once.

The same is the case with certain books. Conveniently billed ‘Young Adult’ fiction. But like not all books – in my highly subjective opinion - can be truly enjoyed by adults as well (and this coming from me, who still reads Three Investigators still). So assuming you’re looking for a fun read that takes you back to the ‘good fun’ days of adventurous adolescence, but one that also offers the ‘adult’ in you a second layer of fun and added reading pleasure (and if you wish, one that you can deconstruct, look at it from a societal perspective, etc. etc.), here’s a short random list from theBekku, of ‘young adult' books. 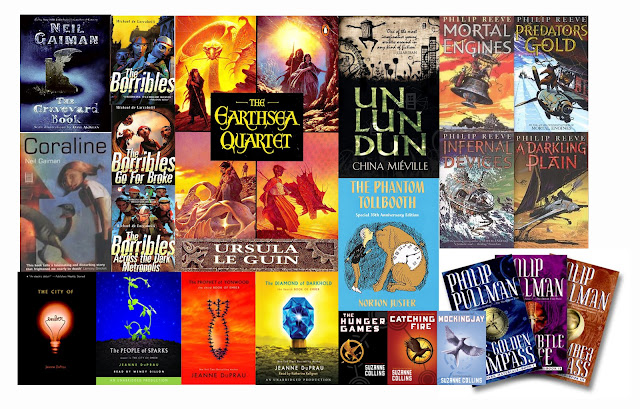 All of these books fall under the same category as say, The Hobbit, which was primarily for children but can be enjoyed by adults (unlike LOTR which was the opposite). And yes, Ice Age. This list is by no means exhaustive, by any measure. These are just the book’s I like enough personally to recommend. If there are any I’ve missed, or you think I should read, do a good turn and let me know in the comments section. And because fantasy, adventure, a sense of newness, discovery and wonder is according to me one of the chief emotions of young adult-hood, this list tilts more towards fantasy and plausible alternative worlds and situations rather than books like say, Curious Incident of the Dog in the Nighttime.

Now, you’re either the kind of person who will take my word for it (for reasons known best to you) or the kind who will still Google the title/author and look it up on wikipedia/ amazon/ good reads. Thusly, this list is not accompanied by any descriptions or gushing praise, all I can say is that if you’re a reader you won’t regret the time you spend within these books. Get ready for subterranean cities, other worlds and other mothers, competitions, rumbling mobile metropolises, magic and fun.

There you go. Will add more in a while or a bit, whichever is earlier.
And here’s how you kill two birds with one book.
Gift your son/daughter/nephew/niece any of the above (or all), and introduce them to new worlds of wonder and come across as a great father/father/uncle/aunt and when the brats are done with it, quietly borrow and read it. Or the other way ‘round. Also recommended for adults who want to buy it solely for themselves, for the children they are ;)
Miaowed by Shenoy

"who are children still, albeit with beards, moustaches, wives and credit card debts" hahaha Spot on.

The Earthsea Quartet and The Phantom Tollbooth are 2 of my absolute all time favourite books, adult or child.
And I'm also a cat person!!! so very pleased to make your acquaintance! Have just started a blog, but it's a bit rudimentary, in other words I don't really know what I'm doing, but if it gets off the groudn I'll send you a link!